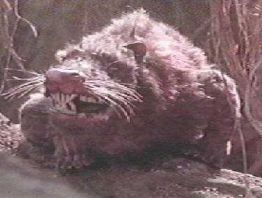 If you were born between the years of 1970 and 1985, you should have seen the movie Princess Bride at least once (and due to its popularity on cable networks, you have most likely seen in approximately 1,257 times). In fact, this movie is one of my favorites. So think about the plot line, when Wesley and Buttercup are traipsing through the fire swamp and Wesley fights with the ROUS (rodent of unusual size). That was a pretty big rat, wouldn’t you think? Probably much bigger than a rat could even get here, where they sometimes reach the size of a small housecat in the big cities, but no larger, right?
Wrong. At least in South America you’d be wrong, where scientists recently unearthed the fossil of a ONE-TON rodent. To put this into perspective, the average horse weighs in at about a half ton. Now that is quite a rat, if you ask me. Said rat could probably eat a grown person and still be hungry for dessert. Can you imagine life with these bad boys roaming the streets? Mobsters could hire them to run jobs; fast food staff would be equipped with rifles and heavy artillery; women would have yet another reason to avoid walking alone late at night. The world would plunge into a deep, dark despair (I picture Gotham City in Batman Begins).
Well, that’s one thing we should be happy we don’t have to worry about today. I mean, yeah we have wars and guns and disease pandemics and poverty and all that stuff, but at least we don’t have giant, man-eating rats. Hooray!
(Check out the AFP article here.)
Advertisement

This entry was posted in life. Bookmark the permalink.