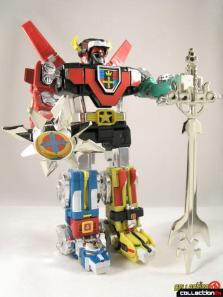 I already got uber-excited last month when I realized that Voltron (the 1980s anime show about five lions who form Voltron) had been released on DVD (and yes, I put it on my Christmas list). I mean, don’t get me wrong, I made sure to tape every single episode when the show made a brief reappearance on USA in 1991. However, as we all know, VHS tapes like to degrade, and so those tapes aren’t exactly in the best condition.

Well, today I cam across this little gem, which made me wonder if maybe Voltron will come back again, this time to take over our world? How awesome would that be?

Of course, the more likely explanation is that Voltron looks somewhat like Transformers (who, I believe, came out AFTER Voltron) but it was cheaper to use Voltron on shoes instead on Transformers. And Reebok, just an FYI, but they’re lions, NOT tigers. Geez. Do some research people!

This entry was posted in life and tagged anime, life. Bookmark the permalink.