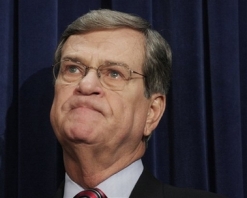 Oh Trent Lott, you poor thing, don’t cry. I know it’s hard maintaining a sense of pride after you continually manage to stick your foot in your mouth every time you open it. But retiring a year early? Has it really been that hard on you? I mean, as far as I know, no one has accused you of soliciting a cop for sex or being involved in the disappearance of a young intern with whom you had an affair. Somehow, you managed to recover from those, um, remarks you made at Strom Thurmond’s 100th birthday party five years ago. And after all that, you give up now? I’m so disappointed in you. Maybe you’re just jumping on the bandwagon of people connected to Bush leaving their positions? I can understand the urge to do so. But if Thurmond came back from the dead and jumped off a bridge, would you follow him?

Lott’s reason, you ask? A simple, “It’s time for us to do something else.” A word to the wise, Mr. Senator. When you return to your lovely home state of Mississippi to do something else, be careful of what comes out of your mouth. I like to live by the motto of thinking before I speak. You should try it some time.

Meanwhile, I’ll be doing a happy dance, along with most of the rest of the country. Later, sucka!

This entry was posted in life and tagged Republicans, Trent Lott. Bookmark the permalink.

One thought on “Trent Lott retiring; Strom Thurmond rolling over in grave; intelligent people around the country rejoicing”